Still today, it seems to be a taboo to speak about sexually transmitted infections, short STI. However, sweeping the topic under the rug is not an option. According to the WHO, there are over a million new cases of STI in the world ̶  every day. STI pathogens include bacteria, viruses, parasites, or fungi, which are, as the name says, mainly transmitted by unprotected sexual intercourse. Some STI pathogens can also be transmitted from mother to child during pregnancy or during birth. Many of the sexually transmitted infections cause virtually no complaints or symptoms. Therefore, they often remain unnoticed and untreated and are unwittingly spread.

However, STI may have severe health consequences, even without causing symptoms or pain. In particular, they may lead to infertility, abortions or developmental disorders in unborn babies. Also the risk of an additional HIV infection increases with an existing sexually transmitted infection with herpes virus or the causative agent of syphilis (Treponema pallidum). Consequently, the smallest sign of an STI should be taken seriously and in case anything seems suspicious, one should get tested by a medical expert. Diagnosis is often based on pathogen cultures, or on the detection of pathogen DNA by means of molecular genetic techniques, not only for pathogens that are difficult to culture. With the EUROArray STI, a patient sample can be investigated for the presence of genetic material from 11 relevant pathogens of STI in a single analysis. 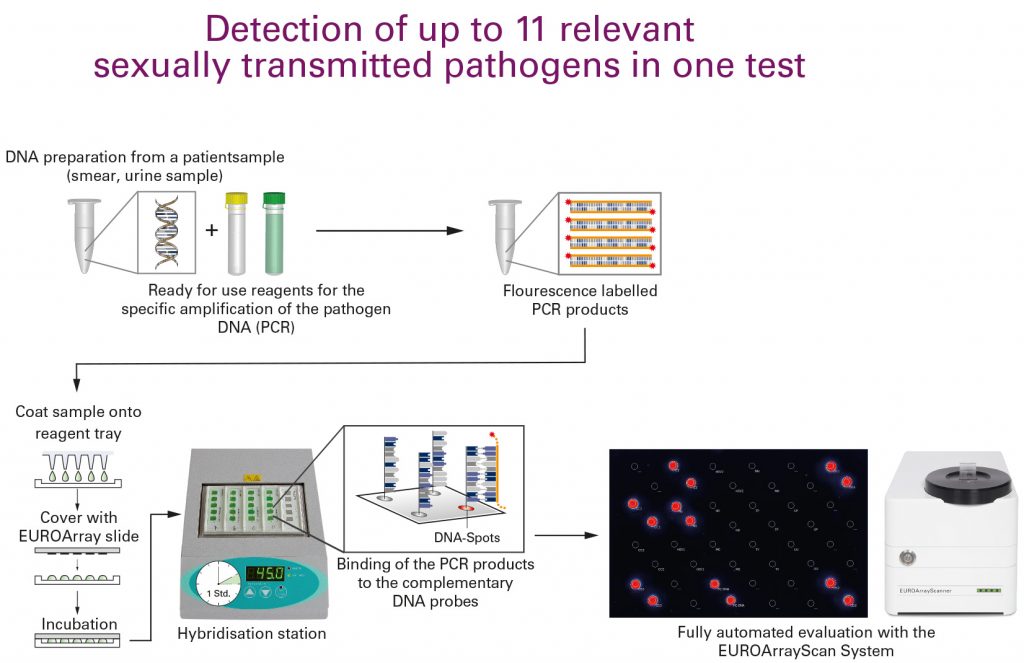 Infections with Chlamydia trachomatis are among the most frequent STIs. Even though the infections often pass unnoticed, the bacteria may lead to inflammation in the sexual organs and, in the long run, to infertility. Moreover, bacteria can be passed from mother to the child during delivery and cause dangerous infections.

Neisseria gonorrhoeae, the causing pathogen of gonorrhoea, affects the mucous membrane of the urinary tract, the cervix, the rectum or the conjunctiva of the eye. An ascending infection may lead to inflammation, e.g. of the prostate (prostatitis), or the epididymis in men, or salpingitis in women.

The two related genera of bacteria, Mycoplasma (M. hominis, M. genitalium) and Ureaplasma (U. urealyticum, U. parvum), can frequently be detected in the urogenital tract of sexually active men and women. Infections proceed asymptomatically in many cases. However, they can also lead to inflammation of the urethra (urethritis) and the lower genital tract, and, eventually, also to infertility. There are indications that especially U. urealyticum is associated with a non-gonorrhoeal urethritis in men, whilst U. parvum has a higher prevalence, but cannot be linked to a disease.

Infections with the pathogenic agent of syphilis, Treponema pallidum, show a symptomatic course in around 50% of cases. This is divided into several stages: The formation of an ulcer at the place of ingress of the bacteria, called ulcus durum, together with a swelling of the regional lymph node are characteristic of the first stage.  In the second stage, all lymph nodes are swollen, and eczema and hair loss may occur, amongst other things. In the third and fourth stage the inner organs and sometimes also the nervous system (neurosyphilis) are affected. Syphilis in pregnancy often leads to miscarriage.

There is also Haemophilus ducreyi, the pathogenic agent of ulcus molle, which occurs very rarely in Germany. It occurs predominantly in tropical regions in Africa, South-East Asia and Latin America.

Herpes simplex viruses (HSV-1, HSV-2) are infectious agents which are distributed all over the world. The characteristic herpes blisters form mainly in the area of the lips and in the genital area. Genital herpes is transmitted by mucous membrane contact during sexual intercourse with an infected person. HSV infections in newborns taking place during delivery, may cause life-threatening diseases.

Trichomonas vaginalis is a parasitic protozoon which causes inflammation of the vagina and the urethra. The disease it causes is Trichomoniasis.

Bacterial STIs, such as Chlamydia infections, gonorrhoea and syphilis, and infections with Trichomonas can be cured with antibiotics. The symptoms of viral STIs, e.g. HSV infections, may be treated with medication, but the disease is not curable.

To the bones – diseases of the bone metabolism

The nervous system under attack – the atypical side of rheumatic diseases