A feeling of Sherlock Holmes

Article series on the subject of state-of-the-art mycology in dermatology,
3rd article

The marvellous city of Edinburgh inspired several novelists such as Joanne K. Rowling (“Harry Potter” and Robert Louis Stevenson (“The strange case of Dr Jekyll and Mr Hyde”) to write works of world literature, and the physician Arthur Conan Doyle to create the character of Sherlock Holmes. After introducing PCR testing in our practice laboratory, I felt a bit like Sherlock Holmes myself, like a master detective able to quickly and elegantly solve even the most difficult case. Nothing was impossible; apparently any riddle could be solved, be it onychomycosis, Tinea capitis under therapy, a tricky germ in an interlaboratory assessment scheme, C. albicans on a hormone spiral preserved in formaldehyde or the detection of S. brevicaulis in a tiny bottle of nail tincture.

I was particularly impressed by two “criminal” cases. 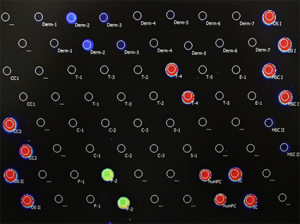 In the first one, we needed to find out whether it would be possible to identify a pathogen in a paraffin block. The provided PAS specimen was wonderfully positive (see title image), but the pathogen was unidentifiable on the species level, which is where histology reaches its limits. The clinical picture was Tinea corporis generalisata, which had already persisted for decades and was resistant to terbafine therapy. PCR analysis based on the paraffin block gave T. rubrum as the result (Fig. 1). Subsequent clinical presentation of the patient confirmed our suspicion: It was indeed a T. rubrum syndrome.

Candida mastitis also is a particularly difficult-to-diagnose mycosis. Since cultivation of the pathogen from breast milk is hardly ever achieved, it is one of the most underdiagnosed types of mycosis. This is particularly critical, as such a severe infection must always be treated systemically. It is also becoming more of an issue from the point of infectiology due to the growing popularity of breast-feeding. C. albicans can be found on the breast of 6.5% of new mothers as soon as day 3 after starting breastfeeding.

Our particular patient suffered from a sharp shooting pain in the breast that expanded radially. Characteristic symptoms were the white spot on the nipple and the blister-like secretion resulting from the CO2 production of the pathogen. This, however, could also have been caused by bacterial germs. If at all, fungi cultures are only successful if additives such as iron sulphate are added. These neutralise the inhibitor lactoferrin contained in breast milk.

These obstacles, however, do not occur in PCR. The result was therefore available on the following day: C. albicans (Fig. 2).

The patient was cured within five days by therapy with fluconazole 200mg. This was followed by a maintenance therapy with 200mg/week for two months. Since a fully breastfed baby takes up only around 15% of the dose of fluconazole given to the mother, a local therapy of the baby’s oral region took place at the same time. The mouth is the most important source of mastitis, even in asymptomatic infants. The mother and child from our case have completely recovered.

Sir Arthur Ignatius Conan Doyle M.D. alias Sherlock Holmes would have been delighted by the genetic fingerprint and the manifold criminological possibilities offered by PCR. As a physician, he would also have been impressed by the resulting fast and targeted mycosis therapies.

Up to the last spore