Alzheimer’s disease is the bête noire of aging. It is a neurodegenerative disease characterized by loss of neurons and synapses. Brain areas involved in memory, cognitive functions, speech capability and spatial orientation are affected in particular. The result is dementia: a diminishing memory, disturbances of speech and disorientation which lead to major problems in coping with everyday tasks.

Major hallmarks of Alzheimer’s disease are intra- and intercellular protein deposits within the brain. They cause massive loss of neurons and therewith a reduction of brain mass. Intracellular deposits, called plaques, consist of β-amyloid peptides which exist in different variants, among these the shorter β-amyloid 1-40 and the longer β-amyloid 1-42. Both fragments are normally eliminated from the tissue to the same extent as they are produced. In patients with Alzheimer’s disease, the metabolism of β-amyloid is disturbed and excessive peptides, majorly β-amyloid 1-42, clumps together, forming plaques. Deposits within the neurons form neurofibrillary tangles, made by tau protein which is hyperphosphorylated in Alzheimer’s patients, leading to its aggregation.

Definite diagnosis of Alzheimer’s disease is challenging and requires evidence of the neuropathological alterations within the brain. However, there are several additional indicators which permit a reliable clinical diagnosis of the disease. Most important is the determination of reduced cognitive performance and behavioral changes, which may not be explained by the person’s age. Imaging techniques support differential diagnosis. Tomographic images of the brain can reveal possible tumor formation, brain damages, infarction or cerebral haemorrhage, but also reduction of brain mass and amyloid plaques. Though, their existence already marks an advanced disease course. Therefore, biomarkers indicative for early disease phases are of major importance to evaluate the course of the pathology, the prognosis for the patient and finally, to decide about the initiation of therapeutic measures. Increased concentrations of soluble (total) tau protein (tau protein and phosphorylated tau protein) and decreased concentrations of β-amyloid in the cerebrospinal fluid (CSF) are pointing to an emerging Alzheimer’s disease. Especially β-amyloid 1-42 levels are reduced in the patients, even five to ten years prior to the onset of dementia. β-amyloid 1-40 levels, instead, are hardly influenced by the disease, but provide a dimension of individual β-amyloid synthesis which may vary from person to person. By calculation of a β-amyloid ratio (1-42/1-40), the early diagnostics can therefore be individualised and their efficiency is increased. Furthermore, the ratio helps to discriminate Alzheimer’s disease from other forms of dementia.

In cooperation with ADx neuroscience, a Belgian company founded by experienced scientists in the field of Alzheimer’s disease research, EUROIMMUN developed a new generation of ELISA test systems for the determination of β-amyloid (1-40, 1-42) and total tau levels in CSF. They are based on highly specific antibodies – for both the capturing of the analytes and their subsequent detection. In combination with available lyophilised calibrators and controls, the ELISAs produce very precise and reproducible results. Matrix effects which may interfere with the measurements were not observed. Automated processing of the ELISA is also possible, e. g. with the Analyzer I and I-2P. 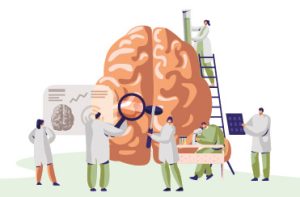 Also take a look into the comprehensive brochure on preanalytics in dementia diagnostics, giving guidance for clinicians and laboratory doctors on careful realisation of each work step from lumbar puncture to CSF analysis to ensure reliable analysis results.

A visit at the Workshop on Biomarkers for Neurodegeneration