Usually, IgM antibodies are used to diagnose an acute infection. During the first contact with a virus, they are formed already within three to five days after the disease onset and remain detectable in the blood for some weeks. It is only with a small time delay – approx. From day 8 on – an increasing number of IgG antibodies are produced and secreted into the blood, which develop a growing affinity to the antigen and efficiently eliminate this (primary immune response, figure A). The IgG antibodies usually persist for months and years, which is why a single IgG-positive sample does not allow a differentiation between acute and convalescent infection phase. When there is a second contact with the same virus, the IgG synthesis is directly and quickly stimulated, the concentration increases steeply within the first days of infection. Specific IgM antibodies, however, are only formed in low or sometimes not detectable quantities (secondary immune response, figure B).

Such a secondary immune reaction can also happen in patients, who, after a first contact with a flavivirus (infection or vaccination), become infected with another virus of the Flavivirus genus, e.g. the Zika virus. In this case, there may not be any specific IgM antibodies in the patient’s blood sample even though there is an acute infection. Consequently, there is no reliable marker of an acute disease. Antibodies of class IgA are frequently formed in parallel to the IgM antibodies during the immune response. They are often found in the mucous membrane secretions of the respiratory tracts, the intestinal and urogenital tract, as well as in lachrymal fluid. They are, however, also secreted into the blood. Their detection can help the diagnosis in acute cases, as the following example of two patients shows.

Both patients are infected with Zika virus and soon show the first symptoms, such as fever, mild skin rash, joint pains and conjunctivitis. Both persons are from Colombia, the country which was one of the most affected by the Zika epidemic 2015/2016, apart from Brazil, and where also other, related flaviviruses exist, such as dengue virus. It is hence not unlikely that two Colombians will have gone through an infection with a flavivirus in the past. Over the course of the infection, several blood samples are withdrawn, which are tested for specific antibodies in the laboratory. 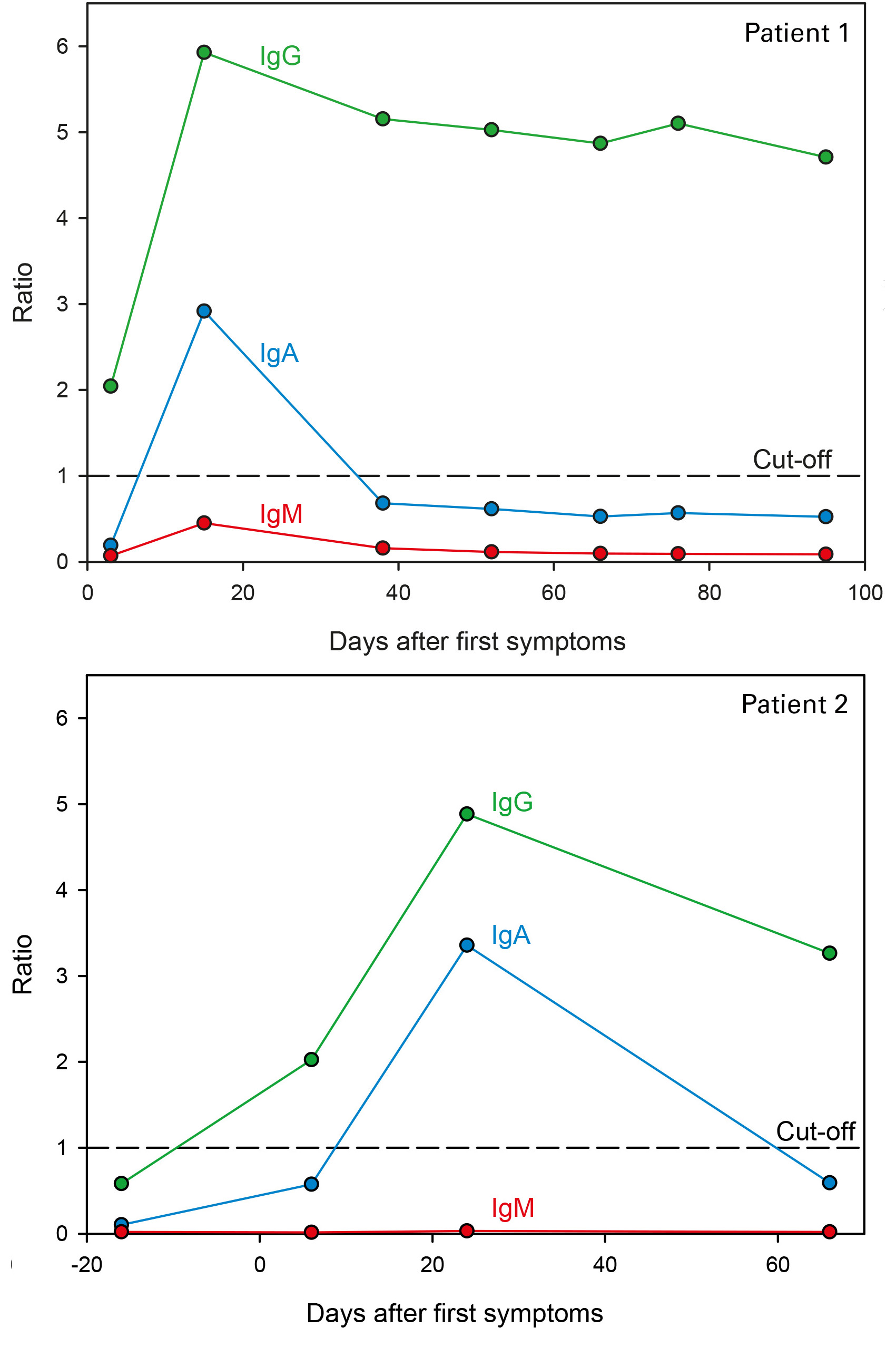 Virus-specific antibodies of class IgG show a steep titer increase already within the first days following onset of symptoms, IgM antibodies against the virus, however, were not detectable in any of the withdrawn samples – neither using the immunofluorescence test (Arbovirus Fever Mosaic 2, based on infected cells), nor with the ELISA (Anti-Zika Virus ELISA, based on the virus-specific protein NS1).

Afterwards, the samples are additionally tested with the ELISA for IgA antibodies against the Zika virus protein NS1. In both patients, a specific IgA immune response could be detected around day 20 (day 15-24) after disease onset. In this way, the suspected acute infection could be confirmed despite the lack of IgM antibodies.

The results show that the IgM level in the serum sample of a patient with a secondary flavirivirus infection is often very low or not detectable at all, whereas specific IgG antibodies are present in high concentrations. By means of serological diagnosis, it cannot be differentiated between an acute infection and the convalescent phase with this sample. The determination of anti-ZIKA IgA antibodies contributes significantly to clarification of ambiguous findings.

The exemplary study herein mentioned was presented on the IMED 2016 (International Meeting on Emerging Diseases and Surveillance)in Vienna and the 1st International Conference on Zika virus February 2017 in the US.