AACC 2015: primary presentation of the EUROLabWorkstation

This year’s conference of the American Association for Clinical Chemistry (AACC) took place in the Georgia World Congress Center, Atlanta, in July 2015 counting more than 17,500 attendees and 720 exhibitors. Spotlight of most companies was again the presentation of complex automation systems. 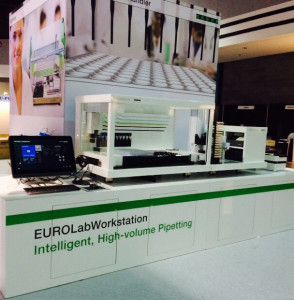 At the EUROIMMUN booth, the brand new EUROLabWorkstation celebrated its debut. The system, which is suited for automated processing of both ELISA and immunofluorescence assays (IFA), was demonstrated to the public for the first time – and attracted much attention!

Virtually every available EUROIMMUN IFA and ELISA for autoimmune diagnostics or infectious serology can be processed automatically using the EUROLabWorkstation – up to 200 assays per hour and more than 800 samples on board. For this purpose, the different modules can be configured variably. Samples, plates, slides and reagents may be traced throughout the complete process by an integrated barcode scanner as also applied in other automation systems by EUROIMMUN.

Consistent, reliable incubation and reading of ELISAs by the EUROLabWorkstation is assured by use of established technologies which already proved one’s worth in other automatic devices.

For processing of IFA, in contrast, a revolutionary new slide washing technology has been developed: “Mergite!” This invention performs washing of slides in a smart and highly efficient manner between and after the incubation steps. Washing buffer is released through little channels that are located opposite to the reaction fields of a slide and flushed onto the separate BIOCHIPs (coated with substrate) at constant rate and with controlled direction. Convection of the fluid and field-wise flushing lead to particularly efficient and thoroughly washing steps with minimal probability of cross contamination.

Many colleagues from different departments have worked hard on the development of the EUROLabWorkstation under the direction of Dr. Bianca Maltzahn. With its recent presentation at AACC, the project has entered the final staight. The system shall be available for laboratories in summer 2016, at the latest.

A reason to celebrate: Completion of the 100th EUROLabWorkstation