A visit at the Workshop on Biomarkers for Neurodegeneration

A good jog to start the day and wake the brain up! That was the first item on the agenda of the workshop on neurodegenerative diseases, organised by Dr Britta Brix for the colleagues from the international EUROIMMUN subsidiaries. The company has by now a large number of test systems for the determination of biomarkers for neurodegenerative diseases, especially Alzheimer’s disease, in its portfolio. Within the two-day training by the product expert, the colleagues learned about the new tests, what they are used for, and how they are used – the latter during practical lessons in the lab. 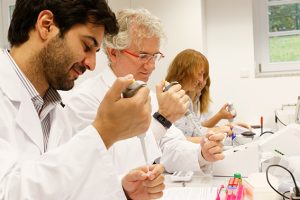 The concentrations of soluble beta amyloid peptides and tau proteins in CSF reflect the degree of neuropathological changes in the brains of Alzheimer’s patients. The ratio of amyloid-β 1-42 and amyloid-β 1-40 concentrations, which takes into account the individual amyloid production of a patient, is an especially reliable measure for the amyloid plaques characteristic of Alzheimer’s disease. Measurements of the total tau protein (T-tau) can indicate unspecific damage of the nerve cells. Capture ELISAs are available for the determination of protein concentrations. These assays were developed by EUROIMMUN, in cooperation with ADx Neurosciences. The ELISA for the determination of concentrations of phosphorylated tau protein (P-tau) in CSF is new in the market. As opposed to T-tau, P-tau is a specific indicator of neurofibrillary bundles in the nerve cells of the patients. Moreover, the test systems for the quantitative determination of the new markers BACE1 and neurogranin will soon be approved. They are designed to detect damage of the synaptic integrity, and therefore cognitive impairments. The CFS diagnostics are supplemented by the molecular genetic microarray EUROArray APOE Direct for the determination of the APOE alleles ε2, ε3 and ε4. These support differential diagnosis and early detection of sporadic late form of Alzheimer’s disease, which usually does not start before the age of 65 years and accounts for around 95% of cases. Especially carriers of the APOE allele ε4 have an increased risk of developing this form of Alzheimer’s disease. The ε2 allele, however, occurs much less frequently in Alzheimer’s patients than in the normal population.

The workshop was completed by a discussion of laboratory results and an overview of the possibilities of test automation. In the final talk, the colleagues said they were very satisfied with the workshop and motivated to include the tests in the product portfolio of their own subsidiaries.