The hands of the guitarist

Article series on the subject of state-of-the-art mycology in dermatology,
15. article

According to a survey conducted by YouGov only a quarter of patients with recurrent foot mycosis know that they are contagious for others and can also spread the infections to other body parts. The rock guitarist who presented with toenail mycosis (see Fig. 1) was also unaware that the pathogen, which was still in his untreated feet, had now spread to the thumbnail and fingernails of his active hand. “It really bothers me when I play. And everyone can see it”. The thumbnail was barely attached to the nail bed. It was hollow inside and too hard to indicate onychomycosis. Therefore, occupational onychogryphosis, which is also very common in violinists, possibly in combination with onychomycosis, came into question. Admittedly, an unusual combination! In any case, the musician had obviously suffered a lot: “My hands are my capital. What if I can’t play anymore?”.

His podiatrist had said that it was a fungus. Therefore, he had treated his nails with medical nail lacquer the day before. The cosmetic nail varnish included in the delivery he had given to his wife.

The podiatrist was to be right with her diagnosis. The EUROArray Dermatomycosis showed a positive result for T. rubrum for both the hands and feet. This demonstrates two things:

This was followed by continuous, well-tolerated, minimal systemic therapy with 1× 200 mg polymerised itraconazole per week, which was adapted to the biology of the pathogen. The nails were also treated locally with a novel 40% urea gel oil. It is suitable for the treatment of both onychomycosis and onychogryphosis and does not require plaster dressings due to its special galenics. This was supplemented by a daily treatment with Ciclopoli lacquer. Due to a capillary effect, both topical medicines penetrate deep into the nail, even if it is calloused. 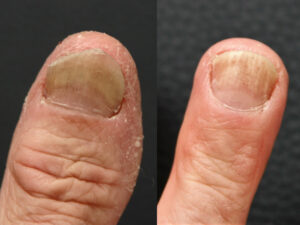 Abb. 1: Thumbnail and fingernail of a 69-year-old rock guitarist with suspected onychomycosis versus onychogryphosis (with positive EUROArray Dermatomycosis result for T. rubrum) 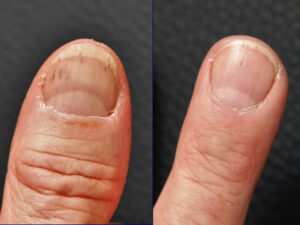 The nails of the hand had healed after six months (Fig. 2), apart from splinter haemorrhages, which are not uncommon in the course of mycosis therapy. Both nails were anatomically fully intact again and attached to the nail bed. This was especially important for the professional musician. He was thrilled with the therapy result: “Even the skin is as new as that of a baby!”. He still had to treat his nails with a nail strengthener based on mastic, hyaluronic acid and silicone. The next tour could come, the guitarist said, especially since Corona was no longer in the way. Not only has the musician’s quality of life been restored, he no longer has to fear a relapse. A second PCR for therapy control gave a negative result, i.e. no more fungal spores – the most important cause of a relapse – were detected.

This example shows once again what a beautiful field mycology is. If the diagnosis is correct, it is blessed with terrific healing success, combined with great gratitude on the part of the patients for “this miracle” that they no longer thought possible. The next check-up now took place backstage, behind the mycological stage if you will, because “The feet surely need some more time”.

Dear colleagues,
I can conclude my small series from everyday practice in mycology in the knowledge that the diagnosis and therapy of mycoses in the literal sense of this casuistry are in the best hands with you. Thank you very much for your attention and appreciation!

The conclusion remains: Every mycosis can be diagnosed, every mycosis can be cured. The possibilities for this are better today than ever before ‒ thanks to PCR and many therapeutic innovations. Mycology is thus on the right track. May it be preserved in most practices and clinics because fungal pathogens never die out.

Corona is giving a boost to mycology