Article series on the subject of state-of-the-art mycology in dermatology,
14. article

I recently received the following letter from a family from L.:

Our 6-year-old spends a lot of time on his grandparents’ professional farm. While there, he hit his head. The resulting wound developed into a suppurative patch. Our son then received three operations by paediatric surgeons. The dermatological department at the hospital also looked at his case and diagnosed him with pyoderma gangraenosum. He was then treated with cortisone and antibiotics but new patches developed on his head. The hospital suggested to operate again after Christmas and to increase the cortisone dosage. On 27 December 2021 we went to the university dermatology clinic in M. on our own responsibility. Their diagnosis was deep trichophytosis and our son was given fluconazole syrup and ciclopirox cream. Since then he has been visibly improving and the wounds are healing. His hair is also slowly growing back. Unfortunately, not in the area where he was operated on. 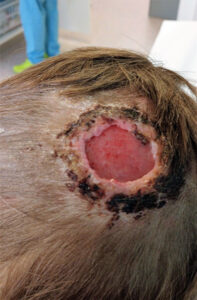 Such reports are no isolated cases. Unfortunately, scalpings are not rare at all (see case in fig. 1). They also show how insufficient the knowledge of mycoses still is. In good cases, microbiological diagnostics are finally performed using the surgical material, and it is only after a positive result that the previous treatment is questioned and antimycotic therapy is initiated. So the family’s decision to go to M. and the university clinic’s choice of fluconazole and ciclopirox therapy were both spot-on. Fluconazole enters the hair follicle and is also water-soluble, which improves its distribution. It can be detected on and in the hair, even if there is no water, which is useful for the treatment of tinea capitis. Ciclopirox, on the other hand, has broad and direct sporicidal effects. This forms a perfect synergy of local and systemic therapy.

Diagnostic possibilities regarding mycoses have also rapidly improved over the last few years, especially thanks to precise and rapid genetic diagnostics (PCR). A textbook example for its usefulness is bovine trichophytosis, which is caused by T. verrucosum, a pathogen that grows extremely slowly. It takes weeks for small colonies to form on the medium (fig. 2, left). The PCR, on the other hand, shows a positive result within 48 hours (fig. 2, right).

Fig. 2: The causative agent of bovine trichophytosis after 5-week incubation on mycological agar (left) and determined after two days in the EUROArray Dermatomycosis (right).

What good is diagnostic progress, though, when the two anamnestic indications of a suppurative patch on the head and contact with cattle do not bring on thoughts of mycoses? I was wrong when I thought mycology seminars were no longer needed and I could probably slowly retire from them after the first few in-person events with cultures and microscopes that took place after the pandemic. The case of this little patient shows once again how important it is to continue to also promote the fight against mycoses in professional trainings. This means that education and training must be strengthened. How about an academic chair for mycology at every university including lectures on medical mycology? Or podcasts on fungi? After all, infectiology does not consist of only viruses and bacteria.

But let us get back to T. verrucosum infections. As a boy, I spent my last school years in Zipsendorf close to Meuselwitz, an idyllic village in Thuringia. I still remember signs at the entrance to each village, claiming with pride: “Municipality free from bovine trichophytosis”. As a matter of fact, all calves were vaccinated with a highly effective live vaccine, leading to bovine trichopythosis being considered nearly eradicated. However, the pathogen recovered from the measure after unification and the difficult infection resurged in Eastern Germany.

With the case of this six-year-old patient in mind I wonder if mandatory vaccination of calves should be reintroduced. The omens are favourable with a veterinarian at the head of the Robert Koch Institute in Berlin. In fact, vaccinating the cattle makes immunological sense, as T. verrucosum is the only fungal pathogen among the dermatophytes that has better growth at 37 °C than at room temperature and that can thus penetrate the tissue more deeply, leading to swelling of the lymph nodes and activation of the immune system. This is never the case with T. rubrum in the nail or M. furfur on the skin surface.

Unfortunately, T. verrucosum infections also sometimes leaves scars, which can often be seen on the forearms of milkers and cattle breeders – a famous example is German politician Gregor Gysi, who prides himself on having practised this honest profession.

Let us all sincerely hope that our patient’s scars heal and his hair regrows in the operated area – even if it is by replacement. According to his parents, he has not lacked bravery so far.