It is becoming increasingly clear that not only antibodies against SARS-CoV-2 play a role in building immunity against the coronavirus. T cells, as part of the cellular immune response, also have a major function in the development of immune memory to SARS-CoV-2. Findings from research into immunity to related viruses such as SARS-CoV-1 and MERS-CoV (Middle-East respiratory syndrome coronavirus) have shown that cellular immune responses against these coronaviruses are maintained for longer than antibody responses. Moreover, recent data suggest that the majority of infected individuals develop a robust and long-lasting T-cell immune response, which can influence the durability of immunity and thus future vaccination regimens.

Alongside antibody-producing B cells, T cells represent a second important cell type of the adaptive immune defence of vertebrates. In contrast to the innate (non-specific) immune defence, which is based on general defence mechanisms against any kind of invader, the cells of the adaptive immune defence can react specifically to antigens of pathogens, e.g. bacteria, viruses, etc., and combat them in a very targeted manner through cellular defence mechanisms or the development of specific antibodies. The T cells perform various tasks in this complex system and thus contribute significantly to the control of the immune defence.

In the thymus, T cells mature and learn to recognise foreign antigens on diseased or infected cells. If a T cell on its patrol through the bloodstream encounters such a diseased cell and recognises the foreign pathogen antigen on the cell surface, the T cell is activated and initiates the immune defence. Depending on the type of T cell, the diseased cells are destroyed directly (killer T cells) or messenger substances are released to other immune cells (helper T cells), including B cells, which then begin to develop antibodies. Active T cells later become so-called memory cells, which “remember” the pathogen when it is encountered again by the body and trigger a fast and effective immune response.

Not only antibodies, but also T cells are thus an important component of the immune system to fight a SARS-CoV-2 infection and to protect against infection with the coronavirus. In addition to the concentration of specific antibodies, the activity of T cells is also relevant for assessing a person’s immune status to SARS-CoV-2. The immune system may be weakened especially in risk groups, such as elderly people or persons with an underlying condition who are under immunosuppressive therapy. This is why these persons may develop antibodies against the coronavirus as a result of vaccination in an insufficient manner. An assessment of the T-cell activity can provide useful information about the individual immune status particularly in these cases.

Similar to the antibody test, only a blood sample from the patient is required to determine the T-cell activity against SARS-CoV-2 with the EUROIMMUN Quan-T-Cell. For the testing, the whole-blood sample is initially brought into contact with a specific SARS-CoV-2 antigen (based on the SARS-CoV-2 spike protein) and thereby stimulated. If there are T cells in the blood sample that recognise and bind to the viral antigen, they secrete the messenger substance interferon-gamma (INF-γ) as a result of this stimulation. Its concentration can then be measured and provides information about the T cell activity, since the concentration of INF-γ is proportional to the activity of the T cells.

Unlike many complex procedures for investigating T-cell responses in research, the CE-marked Quan-T-Cell is designed for diagnostic use and analysis of many samples. Only a few steps are required: 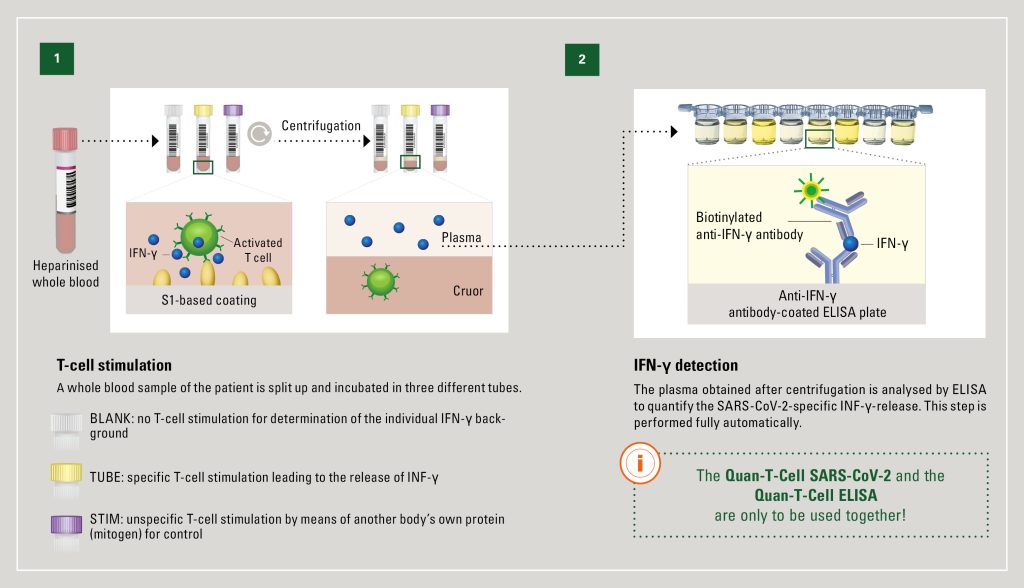 Step 1: A whole blood sample is divided among three different stimulation tubes and incubated in them.

TUBE: T-cell stimulation with a SARS-CoV-2 specific antigen, which leads to the release of  INF-γ in the presence of specific T cells that recognise exactly this antigen

After incubation and possible stimulation of the T cells to release  INF-γ, the tubes are centrifuged and the blood plasma with the  INF-γ is used for further analysis with an ELISA.

Step 2: A classic sandwich ELISA based on monoclonal anti-INF-y antibodies is used to determine the  INF-γ concentration in the samples. The analysis is carried out fully automatically on standard ELISA systems and the final evaluation of the Quan-T-Cell is performed with the help of software in a simple and error-free manner.

According to the current knowledge from research the T-cell activity likely plays an important role in the immune protection mediated through vaccination and thus its measurement can provide valuable information about the individual immune status. EUROIMMUN’s Quan-T-Cell test enables simple and targeted measurement of the SARS-CoV-2-specific T-cell activity after vaccination and infection and will thus help to provide answers to the question on an immune protection against COVID-19.

The immune response after COVID-19 vaccination