Article series on the subject of state-of-the-art mycology in dermatology,
7th article

This pathogen’s discovery was a complete coincidence. In 1989, I had a teaching assignment at the medical faculty in Luanda, where I was supposed to teach medical students, but ended up learning more than teaching, of malaria, cholera, tetanus neonatorum and the people suffering from all these diseases. During examinations of patients with acute vaginal mycosis at a women’s clinic, we found a pathogen that did not fit into any identification system known up to that date. It was lacking chlamydospores, which are typical for C. albicans. Its biochemical structure was not to be found in any detection system, either. And still isn’t today.

Just like many other exotic life forms, the pathogen may have developed in geographic isolation in Madagascar, where our PhD student later identified it in a prostitute. From there, it first spread over the southern part of Africa. Today, it is distributed worldwide, through migration and tourism, and also illegal prostitution.

The yellow press was right away very interested in the pathogen. One cover story asked: “As deadly as AIDS? Charité discovers new sex fungus”. We named the pathogen after its place of discovery:  Candida africana, even though it was quite common among mycologists to name new pathogens after the director of the respective clinic. For example Arthroderma gertleri. The honouree was Prof. Johannes Gertler, Director of the Dermatological Clinic of the Charité, and the name giver was the mycologist, Mrs. Hannelore Ziegler-Böhme.

By now, the genome of the pathogen has been sequenced. It actually constitutes an own species. Without chlamydospores, the pathogen does neither belong to C. albicans, nor to C. dubliniensis, in the same way as a giraffe without a neck is not a giraffe. Nonetheless, the fungus is often still classed as C. albicans. The EUROIMMUN microarray also gives out the result C. albicans, which indicates a common gene sequence in the test system. 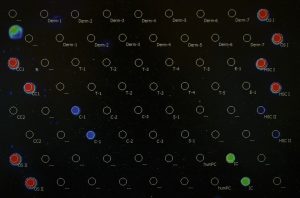 Detection of C. africana with the EUROArray Dermatomycosis, ecognisable due to the weak signal C1.

In the PCR, however, it can be identified due to its extraordinary signal, which is not too intensive (see Fig. 1). Moreover, it could be identified by means of an extensive biochemical analysis, which is, however, very complicated and only seldom performed in the laboratory routine. The labs usually do not detect C. dubliniensis because it is often confused with C. albicans due to its colour on CHROMagar.

And this is OK, since these species all have a relatively similar pathogenicity, belong to the risk group 2 of the fungal pathogens and hardly differ in their treatment. The sole clinically relevant difference between C. africana and the two other species is that the African species does not form chlamydospores. Therefore, the resulting mycosis is not as persistent as others and only seldom turns chronic. The clinical picture of C. africana is mostly acute. This seems to be due to the immunological foreignness of the pathogen. It is comparable to the “Thailand fungus”, the smallpox in Latin America or the syphilis, which in exchange came from over there to Europe and was at first even fatal.

The fungus from Africa was a scientific moment of glory for me. It’s been registered as “Candida africana Tietz et al., anamorph (ATCC® MYA-2669™)“ in the USA and provided by the American Type Culture Collection upon request for studies and other purposes all over the world.

This time, I would like to conclude with a quote of the great pathologist and politician Rudolf Virchow, which could not describe any better the introduction of gene diagnostics as a milestone in mycosis diagnostics:

“In the field of human discoveries, the finding of the principle is the essential thing, in which all further perfections arise from it only as natural progressions”.

Historically, the PCR can be compared with Robert Koch pouring agar-agar in a Petri dish to make pathogen cultures. That was also a revolution, an instrument which led to other great things, such as the discovery of the pathogen causing tuberculosis, only seven buildings away from our small PCR practice lab, with a memorial plaque commemorating his achievements.

A feeling of Sherlock Holmes