Vitamin D – a jack of all trades

A, B, C, D, E, K … these are the designations of vitamins that are considered essential for humans. They must be available in sufficient amounts in the body to sustain vital functions. One of these vitamins, vitamin D, has been in the limelight scientifically for several years.

An adult needs around 20 µg of vitamin D per day (Germany Nutrition Society). Only around 10% of the daily vitamin D requirement can be acquired through food (especially fatty fish and liver), in contrast to other vitamins. Up to 90% of the required vitamin D is normally produced by the body. Nevertheless, vitamin D deficiency has become a common condition. For example, in Germany over 40% of the population regardless of gender or age (3 to 79 years) do not have an adequate provision of vitamin D.

But where is the problem? The precursor of vitamin D, the provitamin 7-dehydrocholesterol is produced in the body. UVB rays from the sun convert 7-dehydrocholesterol into vitamin D in the skin. The amount of vitamin D produced is influenced by the area of skin exposed, the age and skin pigmentation of the individual and external factors such as the solar altitude. In northern countries, sunlight is in short supply especially in the winter, when people also cover their bodies with clothing against the cold. This, combined with the lack of outside activity in many people’s daily lives, results in an undersupply of vitamin D in a large proportion of the population. 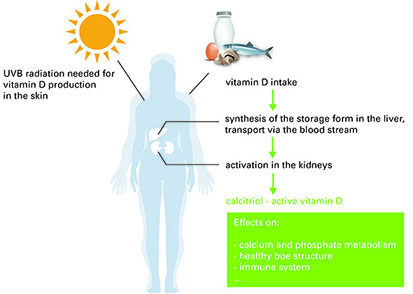 Vitamin D is initially biologically inactive, regardless of whether it is produced in the body or taken up in food. It is converted in two steps into the active form, the hormone calcitrol. In the liver vitamin D is first converted into the storage form 25-OH vitamin D. This passes via the blood stream into target organs, where it is converted into the biologically active calcitrol. The most important synthesis organ is the kidney. Whereas vitamin D and calcitrol have only a short half-life, the 25-OH vitamin D concentration in the blood is constant over a long time period. Therefore, this parameter is generally used to determine the vitamin D supply.

Calcitrol binds to intracellular vitamin D receptors (VDR) in the cells of target organs. The complexes formed bind to DNA in the cell nucleus and influence the expression of around 900 genes. The exact genes influenced by calcitrol and the subsequent effects on cells varies from tissue to tissue. Insight and hypotheses on the numerous functions come in particular from in vitro experiments using cell culture, in vivo experiments with mouse models and epidemiological studies.

One of the most important functions of calcitrol is the regulation of calcium and phosphate metabolism. In the small intestine it is required for the absorption of these two minerals, which in turn are essential for healthy bone structure. Calcitrol also seems to protect from autoimmune and cancer diseases [1, 2, 3]. The hormone limits reactions of the immune system by influencing the development of dendritic cells and regulatory T-cells. In this way it plays an important role in so-called self-tolerance – the ability of the immune system to recognise the body’s own molecules and refrain from attacking them. Examples of autoimmune diseases which are associated with vitamin D deficiency are multiple sclerosis and diabetes mellitus type 1 [1, 2]. Further, some forms of cancer are associated with the vitamin D level, including intestinal, breast and prostate cancers [3, 4]. The exact molecular links have not yet been clarified, although calcitrol is known to influence the cell cycle and cellular metabolism. It appears to inhibit cell division and to promote controlled death of damaged or abnormal cells [3, 4]. Lastly, calcitrol is also associated with a reduction in the risk for developing cardiovascular or neurological/cognitive disorders [2, 5].