Roofing ceremony for the “House of Engineers”

On 22 September, EUROIMMUN celebrated the roofing ceremony of the new “House of Engineers” in Dassow, only 14 months after the official laying of the cornerstone. About 60 guests were invited, including the administrative head of the district, Mrs. Weiss, Minister of Economics, Construction and Tourism in Mecklenburg-West Pomerania, Mr. Glawe, and the Deputy Mayor of Dassow, Mrs. Pahl. Also, members of the supervisory board, neighbors and colleagues from the sections Construction and Device Manufacturing – they are going to move into the building within the next year – came to celebrate the roofing party. From 2018, new device prototypes shall be developed here on four floors. 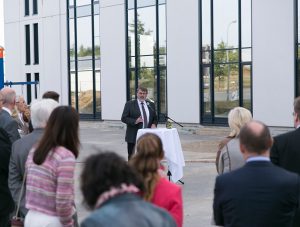 Axel Blankenburg, Director of EUROIMMUN’s financial department, welcomed the guests in the morning and said “My office is directly opposite and it was exciting for me to see how fast the building developed”. Exactly on 22 September 2008, the first six colleagues had started their work in Dassow, today there are almost 600, and now the new building provides the basis for even further growth. Subsequently, Prof. Winfried Stöcker thanked the government of Mecklenburg-West Pomerania for the financial support for the building and encouraged politics to further promote the development of new industries and technologies.

Mrs. Weiss started with the words “This is a good day for Dassow and the district” and referred to EUROIMMUN settling in Dassow as a “lucky chance”. For minister Glawe, the construction of the additional building points to Mecklenburg-West Pomerania as an attractive site for Research and Development. According to Glawe, the activities were planned to be expanded in the future so that more products can be developed and produced in the region. Also Michael von Schmude, Director of the Supervisory Board does not expect the “House of Engineers” to be the end of the investments. Indeed, there would exist more options for further development.

Until then, however, the completion of the “House of Engineers” is on top of the agenda – an object which he thinks couldn’t be any nicer for a modern building.

Our House of Engineers in figures