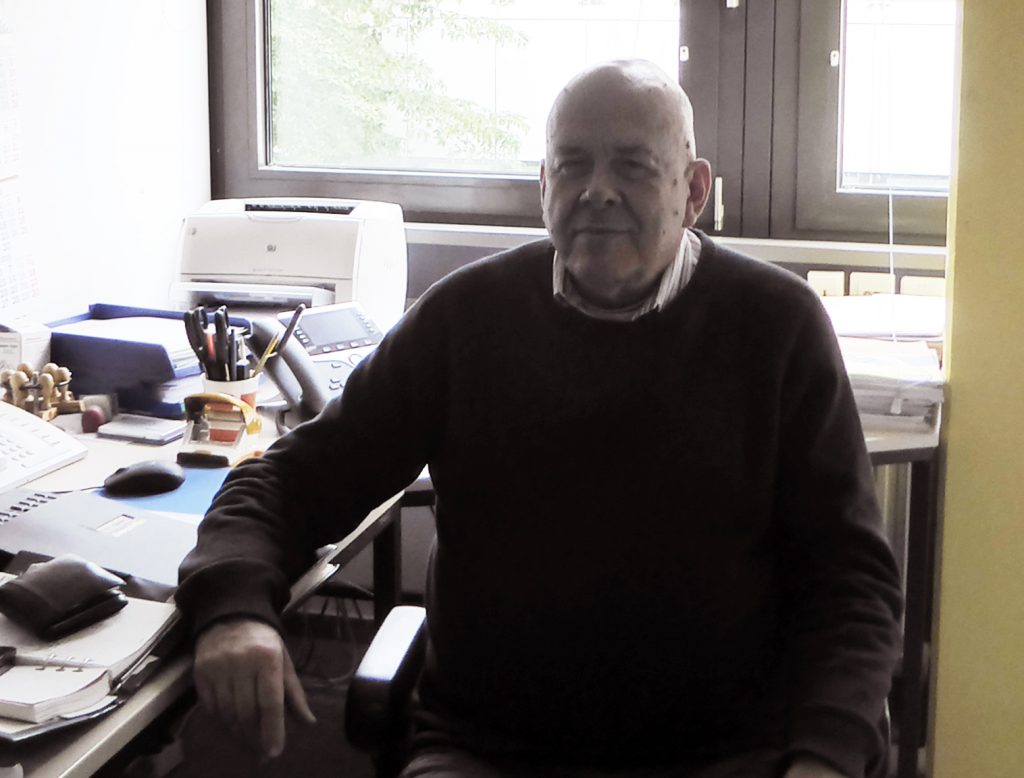 Prof. Hilgenfeld is director of the Institute for Biochemistry at the University of Lübeck. He works on crystal structures of viral proteins.

Prof. Rolf Hilgenfeld and his team from the Institute for Biochemistry at the University of Lübeck look back at several months of intense work, including many night shifts. At the end of July 2016, their work on the crystal structure of a protein essential for survival of the Zika virus was published in the scientific journal Science (Lei J et al., Science 2016, 353(6298):503-5). This was a project they had worked on for not even six months; after the Zika virus spread in Latin America and a link between infections in pregnant women and severe congenital deformations of the embryonic brain was established.

Achilles heel of the Zika virus

“We knew there were many competing with us who were also working on the crystal structure of the viral NS2B-NS3 protease. Several work groups were hard on our heels, which made the past months quite intense”. The knowledge of the three-dimensional structure and folding of the protein is essential, since it is the basis for the development of protease inhibitors for the treatment of infected persons. The Zika virus belongs to the group of flaviviruses, as do dengue and West Nile viruses. They are all transmitted by mosquitoes. The NS2B-NS3 proteases of these viruses are required for reproduction. They also attack proteins of the host’s innate immune response. “You could say they are the viruses’ Achilles heel” says Prof. Hilgenfeld. Compared to the proteases of dengue or West Nile viruses, the NS2B-NS3 of Zika virus is hyperactive and has a clearly higher affinity to its substrates. These are converted 20 times more efficiently by the Zika virus protease than by the other virus proteases. “This could mean Zika virus spreads much faster than dengue or West Nile virus, for instance, and that it can disable the innate immune response of the host more efficiently. However, none of this is confirmed”, adds the scientist.

Enzymes work according to the lock and key model. This means, a specific substrate fits exactly into the so-called active pocket of the enzyme in which the catalytic reaction takes place. The better the three-dimensional forms of the enzyme and the substrate intertwine, the more effectively the substrate is converted. The decryption of the enzyme structure should therefore provide the explanation for the hyperactivity and an approach for the development of an inhibitor that binds the active centre and blocks it for the actual substrate. In this way, the enzyme would be inactived and the virus made innocuous.

From enzymes to crystals

It is, however, technically challenging to identify the crystal structure of an enzyme. In this case, the NS2B-NS3 protease even changes its conformation if it has bound a substrate or an inhibitor (active form). Consequently, in order to identify the structure of the active enzyme, the researchers required a binding partner for the protein. Help came from Prof. Christian Klein and Dr. Christoph Nitsche from the University of Heidelberg, who contributed to the investigation, by providing boric acid dipeptide. Boric acid is a known protease inhibitor. It is, however, generally to unspecific for use as a medication in humans, since it even blocks body’s own enzymes. 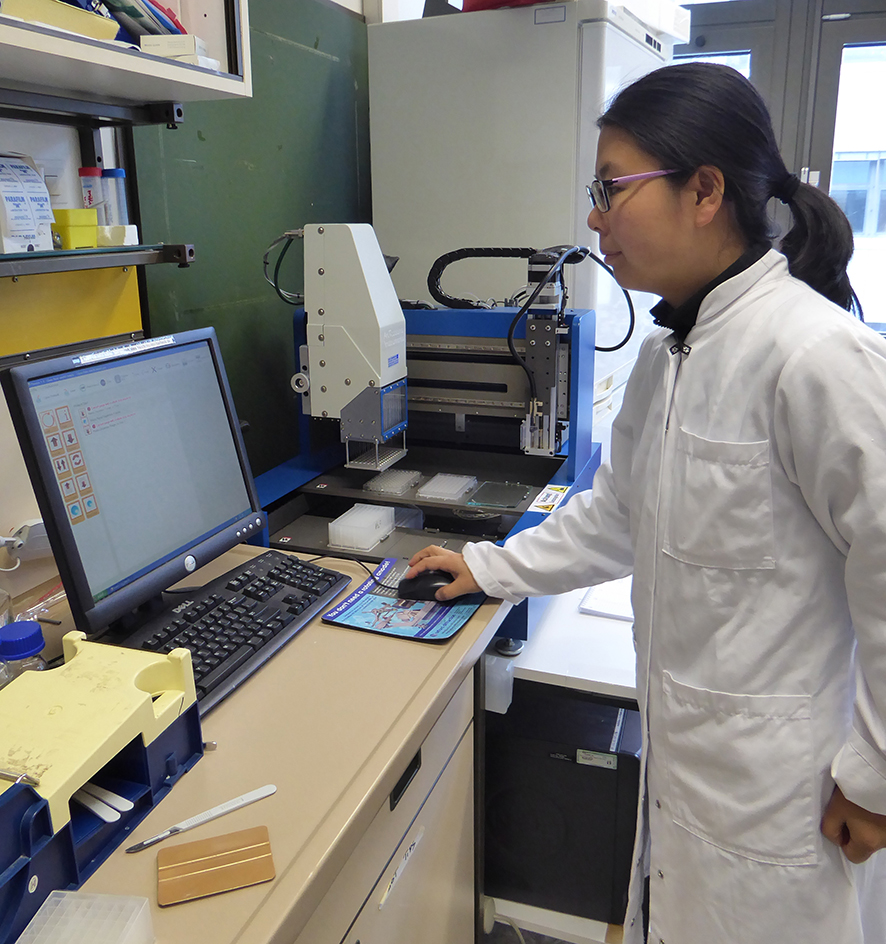 Linlin Zhang looks for the optimal conditions for crystallisation of NS2B-NS3 protease with the help of a robot.

In order to crystallise the complex formed of protease and inhibitor, the protein must first be produced and purified. Subsequently, a very small amount of the protein inhibitor solution is pipetted into a 96 well microtiter place, in which the crystals are to be grown. Since every protein has different requirements for crystallisation, the conditions can be modified individually for every well on the plate by means of a robot. “No less than 20 parameters can influence the crystallisation and must therefore be varied and adjusted. That is a bit like playing the lottery”, says Prof. Hilgenfeld. If the ideal conditions are found, the first crystal will appear after one or two days.

Dr. Jian Lei deciphers the 3D structure of the NS2B-NS3 crystals at the computer.

“On the 10th April, we were able to go to Hamburg to the German Electron Synchrotron DESY with the first Zika NS2B-NS3 crystals”. There, Hilgenfeld’s colleagues Dr. Jian Lei and Linlin Zhang analysed their material by means of an X-ray diffractometer. This device measures the diffraction and intensities of the X-rays in the crystal. The result is an electron density distribution which can be translated, together with the known amino acid sequence of the protein, into the three-dimensional crystal structure. “Behind all this, there is highly elaborated mathematics. At this point, Dr. Guido Hansen contributed decisively, since in this phase, it looked as if everything was against us”. The formation of rare, so-called twin crystals from two fused crystal grids significantly hindered the work.

But what is really behind the hyperactivity of the Zika virus protease? In the so-called P2 pocket of the active enzyme centre, a different amino acid than in the proteases of West Nile and dengue viruses is found: an aspartate. “The aspartate is negatively charged and apparently interacts much more intensely with the substrate, which presents a positively charged amino acid residue at this spot. Therefore, the binding of the substrate is much stronger”. The amino acid exchange appears to be also co-responsible for the unusual increase in effectiveness of the enzyme. The scientists were actually able to reduce the activity of the proteases by 50% by converting one of the aspartate residues into an uncharged amino acid. “There will be, however, more factors which contribute to the hyperactivity of the enzyme. We just haven’t discovered them yet”.

The work group of Prof. Hilgenfeld will continue investigating the protease and also contribute to the development of a specific inhibitor which could possibly be used for treating infected persons.