Spring is coming and you can tell: the sun is up earlier in the morning, the birds are singing, early bloomers can be seen in the gardens and by the wayside, and, another sure sign, people who are allergic to pollen start sneezing and sniffling.

Even experts are unable to explain why some people develop an allergy while others do not. It is known, however, that at first contact with an allergen (a usually harmless substance from the environment) the immune system of the person is stimulated. The substance is misinterpreted  as “dangerous” by the body, which then produces antibodies, so-called immunoglobulins of class E (IgE). If the person thereafter has contact with the allergen for a second time, the IgE antibodies will bind to it, thus setting off a cascade of responses which cause symptoms of an allergic reaction. Other substances which resemble the allergen in form and structure may also be recognised and bound by the antibodies. The consequence is a so-called cross reaction. 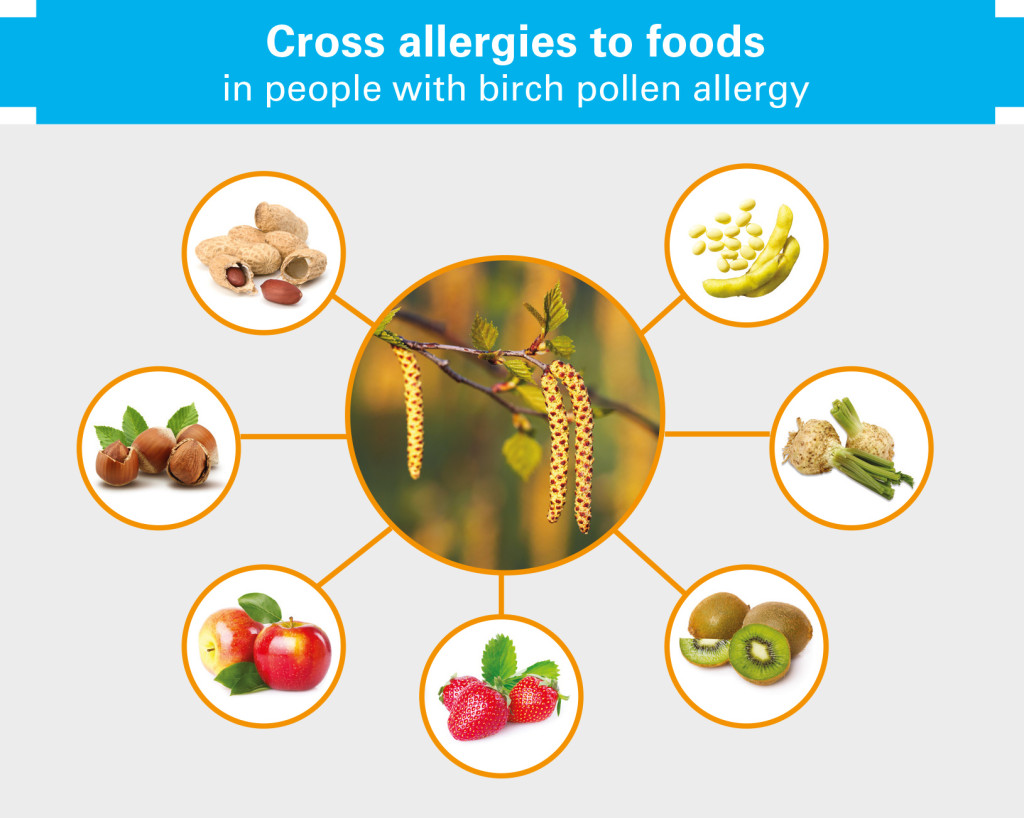 An example of a cross reaction is the one between birch pollen and apples: IgE antibodies, which are usually directed against the allergen of birch pollen, also recognise an apple allergen, which is why many people originally sensitised to birch also react to the fruit. Especially pollen allergens lead to a broad spectrum of cross reactions between different pollens and foods such as fruit, vegetables, pulses or nuts.

It is important for patients to know exactly which are the causative agents of their allergy. One method to identify these is the so-called skin prick test in which the allergenic substances are applied directly onto the skin. If the patient is allergic, reddening and wheals can be seen where the skin has been treated. Blood tests are another important tool of allergy diagnostics. IgE antibodies can be detected in the serum of an allergic person using special tests.

For IgE detection so-called allergen extracts are generally used. These are mixtures of substances extracted from an allergen source, such as birch pollen, which contain all allergenic and non-allergenic  components of the source. IgE antibodies in the serum which react with the extract indicate a sensitisation to the specific antigen source. However, the test result does not reveal which of the many molecules in the extract the patient is sensitive to.

In recent years, scientists have focused on identifying the individual molecules (so-called allergen components) of different allergen sources. These components are now increasingly finding their way into medical laboratories and supplementing conventional diagnostics based on allergen extracts. 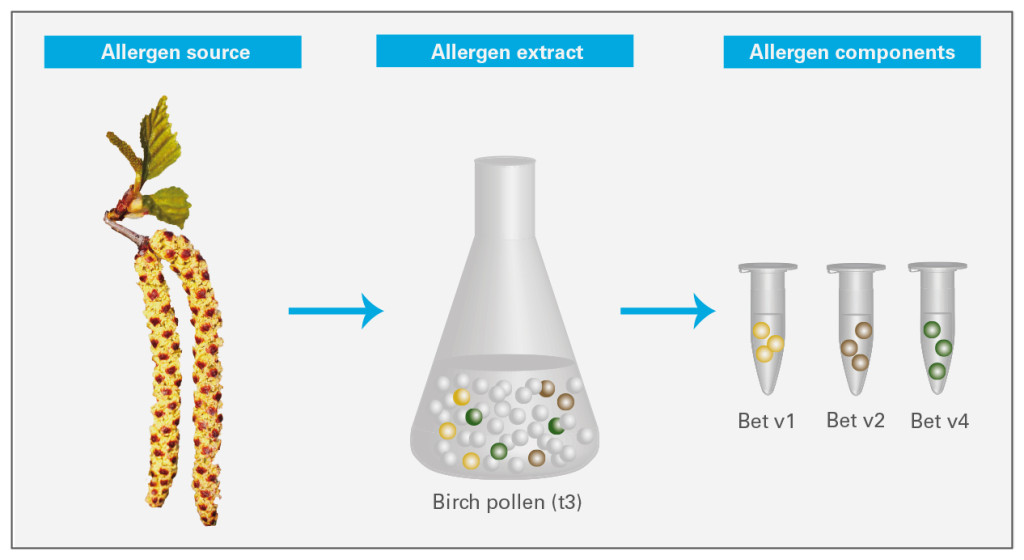 The implementation of allergen components enables both practitioners and patients to gain further useful information.

Differentiation between primary sensitisation and cross reactions: An allergen source generally contains specific allergen components unique to the source and cross-reactive components. These resemble allergens from other sources and can cross react with other IgE antibodies. An allergic reaction to specific allergen components almost always indicates a genuine primary sensitisation. For instance, a person who reacts to the specific birch pollen allergen Bet v1 is indeed sensitised to birch. A reaction with the Bet v2 allergen, however, may instead result from a cross allergy. In this case, it would not be a genuine sensitisation to birch.

Evaluation of the degree of an allergic reaction: Certain allergen components can cause severe allergic reactions, e.g. the anaphylactic shock, whereas others from the same allergen source produce only slight symptoms. Peanut allergies are a good example. A sensitisation to allergen component Ara h2 poses a risk for severe systemic reactions when the allergic person comes into contact with peanuts. Patients who are sensitised to Ara h8, however, often only experience itching in the mouth and the throat after eating peanuts.

Therapy prospects: With hyposensitisation, which is the only therapy directed against the cause of the allergy, the patient is exposed to a rising dose of the allergen over a long period of time. The aim is to slowly accustom the patient’s immune system to the allergenic substance. But the therapy can only be successful if the patient is sensitised to the specific allergen of a source. In birch pollen allergy, for instance, hyposensitisation is only recommended if the patient is sensitised to the specific main allergen component of birch, Bet v1. The therapy is not useful in patients who are exclusively sensitised to cross reactive components of birch pollen (Bet v2, Bet v4, Bet v6) because it very seldom leads to an improvement of the symptoms.

Watch out for ticks this spring: Anaplasmosis in dogs and horses
Comments