A gift from the heavens

Article series on the subject of state-of-the-art mycology in dermatology,
8th article

“The Times They Are a-Changin” is one of the best known songs from Bob Dylan, a winner of the Nobel Prize for Literature. As frequently acknowledged, the same applies for the venerable mycology, which is getting more and more interesting. Another example of an until recently unknown pathogen is Trichophyton indotineae. Its nomenclature seems not yet concluded. In this respect mycology unfortunately keeps changing all too often, which is also the case with other pathogens. 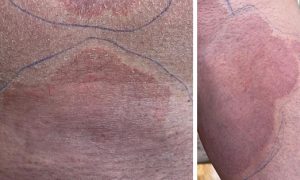 The pathogen came from India before the corona-related travel restrictions were imposed. It is now already endemic, with a tendency to spread even further. Its increase was probably encouraged by the likewise corona-related closure of brothels and the resulting flourishing of illegal prostitution – as in the patient case shown in Fig. 1. This is not the only similarity with the so-called “Thailand fungus”, T. mentagrophytes type VII, which emerged earlier and is also mainly transmitted by sexual contact. It was the first dermatophyte to be classified as an STD (sexually transmitted disease) pathogen. T. indotineae is another such candidate.

What is common to both pathogens is their high resistance to terbafine, which can be found in many strains (Fig. 2). It is caused by a mutation in the squalene epoxidase gene, the point of attack of the anti-fungal drug. This phenomenon is of the utmost relevance because the mutation also occurs in T. rubrum, the by far most frequent dermatophyte with an incidence of approximately one billion infections worldwide.

Luckily, some things never change. One example is the undiminished high effectiveness of nystatin against all relevant Candida species. It’s a blessing in view of the likewise increasing resistance of C. albicans, C. glabrata and C. tropicalis to clotrimazole, fluconazole or itraconazole, with the same consequences for combination drugs such as miconazole (Fig. 2).

Since nystatin was discovered in New York in 1947, there has been no strain found to be resistant to it. Nystatin shoots holes into the cell wall. The germs become emaciated and die, which is clearly visible in the laboratory by the glassy inhibition zone (Fig. 2). This is clear proof of the effectiveness of the golden oldie, which has not encountered resistance for 70 years.

Other things in mycology, however, have changed fundamentally, as can be seen by a request I received from colleagues: The patient in question is a lawyer who has been suffering from onychomycosis for 15 years. All serial cultures were negative. The patient was adamant about continuing the “sacred” varnish treatment but at the same time introduced a declaratory relief action for medical malpractice due to the many negative fungal cultures his doctors had produced. “Mr. Tietz,” my colleague wrote. “I am at a loss. You surely have an ace up your sleeve“. Of course, I do. It’s called PCR. This method can also be used during treatment and has helped me in countless similar situations. No sooner said than done. As expected, the medium showed no growth but instead proof of therapy due to the diffusion of the therapeutic agent into the agar. The PCR was clearly positive within a short time, revealing S. brevicaulis (see title image). The infection healed under therapy with itraconazole (Itragerm) and Ciclopoli. “Gene diagnostics is truly a gift from the heavens, Mr. Tietz. I will give it a try, too.” my colleague replied. The healed lawyer is now heavily involved in promoting the implementation of PCR in statutory health insurance. Good news again.

A line of another brilliant song writer, John Lennon, has been in my head these days as well: “There are places I remember all my life, some have changed, some forever not for better”. For mycology, the latter at least does not apply. Times have changed, but definitely for the better. This is also thanks to gene technology. It is indeed a gift from the heavens, since having 50% of cultures turning out negative was more a curse than a blessing.

With this in mind, dear colleagues, I wish you success!

From Saul to Paul

Corona is giving a boost to mycology
Comments