Anti-inflammatory TNF-α inhibitors are applied to treat different chronic inflammatory disease. However, the medications do not show the same effect in all patients. Therapeutic drug monitoring, the regular control of the drug level, supports the individualisation of the therapy and contributes to a fast therapy success.

Chronic inflammatory bowel diseases, rheumatic diseases and psoriasis are typically associated with inflammatory processes caused by the messenger substance tumour necrosis factor α (TNF-α). The drugs infliximab and adalimumab have existed since the end of the 1990s and beginning of the 2000s. These are monoclonal antibodies which inhibit the binding of TNF-α to its specific receptor by binding to them and thus neutralising them. Therefore, these so-called TNF-α inhibitors can be used as anti-inflammatory medications. 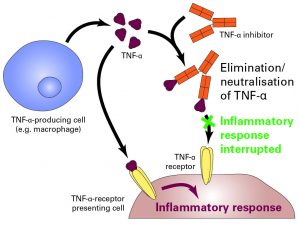 They belong to the group of biologics, i.e. medications which originate from biological sources, e.g. genetically modified organisms. Biologics are therefore similar to the body’s own substances and can thus interfere in the regulatory processes of the body in a targeted manner. Since the corresponding drugs, such as Remicade® (drug: Infliximab) and Humira® (drug: Adalimumab) are very expensive and in part for intravenous administration, TNF-α inhibitors are especially applied in those patients who do not respond sufficiently to conventional medications or in whom the use of conventional medications is contraindicated.

If a patient is to be treated with infliximab or adalimumab, the drug must be dosed individually to achieve the optimal drug level in the blood, since this is crucial for the treatment’s effectiveness. The optimal drug level depends on different factors such as height, age, sex, pre-existing conditions, etc. and may therefore vary significantly from patient to patient despite identical drug doses. This is referred to as a drug’s pharmacokinetics, that is, the individual uptake and processing of the drug in the body. An optimal drug concentration means a drug concentration in the blood that is as low as possible while providing maximum improvement of the symptoms. The drug levels are controlled by the so-called therapeutic drug monitoring (TDM).

EUROIMMUN has extended its portfolio by test systems for TDM and, as official distributor of the Dutch manufacturer Sanquin Reagents, is now offering the MabTrack ELISAs at a global level. Due to their extensive experience with biologics and the participation in numerous scientific studies, Sanquin Reagents is considered an important opinion leader in the field of TDM. The TDM product range includes test systems for specific determination of concentrations of infliximab and adalimumab and their biosimilars (drugs which are very similar to the original product and reveal the same  mechanism of action), as well as for detection of antibodies interfering with the drug (anti-drug antibodies). Patient blood serum or plasma is used as the sample material.

TDM with MabTrack ELISAs is based on two different strategies:

With proactive TDM, the drug level is regularly monitored in patients who respond well to the treatment (responders). In this way, potentially too high, so-called supratherapeutic drug levels can be recognised early. At that level, an increase in the drug dose no longer leads to an improvement of the symptoms. In such cases, the individual doses can be reduced or the administration intervals increased, especially in order to reduce the risk of potential side effects and to save time and costs.

With reactive TDM, the drug levels are monitored in patients who do not respond to the therapy (non-responders). Here, the aim is to find out why the therapy is not working. For example, the drug concentration may be below the optimal range despite the recommended dose being administered, due to the patient’s individual pharmacokinetics. Correspondingly, the individual doses must be increased or the administration intervals reduced. If the drug concentration is below the critical threshold value of 0.5 µg/ml, the presence of anti-drug antibodies is determined according to the strategy using MabTrack ELISAs.

Therapy failure due to anti-drug antibodies

Almost all patients undergoing immunotherapy develop anti-drug antibodies (ADA) at some point. ADA specifically complex the drug and prematurely eliminate it from the body or hinder its mechanism of action. Especially in high concentrations, this may result in a drug not having any effect, so that a change in medication or mechanism of action is required. The concentration of free ADA, which are not bound to infliximab or adalimumab (or their biosimilars) can be semiquantitatively and sensitively determined by MabTrack ADA ELISAs.

There is no panacea for treatment with TNF-α inhibitors. Many factors influence the effectiveness of the drugs, which is why the treatment must be individually customised for every patient. TDM can help to tailor individual treatments and to assure the patient the best outcome of treatment with biologics.