A training workshop on indirect immunofluorescence which took place in the Georgian capital Tbilisi in March has proven a big success. The workshop was organised by the German armed forces’ (Bundeswehr) Institute of Microbiology (InstMikroBioBw) within the framework of the German Partnership Program for Excellence in Biological and Health Security. As per request of the Bundeswehr, EUROIMMUN held the practical part of the workshop and trained participants from the Caucasus region in different immunofluorescence test systems (IFT) and microscopes.

The German foreign office program has been supporting partner countries in Eastern Europe, North Africa, Central Asia, South America and the Middle East in the development of medical, scientific and public health institutions since 2013. For this cause, the InstMikroBioBw is active in Tanzania, Kazakhstan and Georgia. The aim is to improve prevention of biological hazards, for example due to the misuse of infectious or toxic substances, and breakout and spread of highly pathogenic diseases. Targeted projects in the countries develop the capacities for early recognition and identification of dangerous pathogens and raise awareness for biological safety hazards. One main focus of the project is the diagnosis of contagious and/or threatening diseases, as well as methods like indirect immunofluorescence. This technique serves to detect specific signs of an infection in a blood sample. 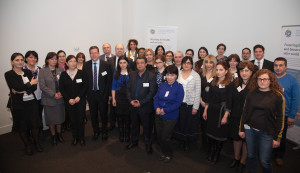 Participants and guests of the workshop.

The workshop in Tbilisi followed the “Train the trainer” concept. The participants were representatives from scientific institutes and centres in Georgia, Armenia and Azerbaijan. In future, they will be in charge of the training of further scientific assistants. Prof. Dr Lothar Zöller, director of the InstMikroBioBw, Monika Lenhard from the German embassy in Georgia and Berhard Ludwig Hopp, military attaché in Georgia were also amongst the guests.

The EUROIMMUN workshop focused on the diagnosis of different tropical infectious diseases which are referred to as emerging infectious diseases, using indirect immunofluorescence. First, the participant could familiarise themselves with the components of a typical EUROIMMUN IF test kits and the incubation technique of the BIOCHIPS (TITERPLANE™).

After this, they were introduced in the correct handling of the fluorescence microscopes. “Many of the participants did not have much experience in the field of immunofluorescence and had to learn how to use the microscopes. Also, some of them only spoke Russian, which made it difficult to explain the devices and their handling. However, they learnt very quickly and as everyone helped out with translation, we could even overcome the language barrier”, says Dr. Erik Lattwein, who realised the training together with Sabine Lederer. Using especially prepared demo slides, the participants learnt how to evaluate and interpret different fluorescence patterns with the microscope. In this way, they examined fictitious patients for infections such as MERS-coronaviruses, Crimean-Congo fever virus, hanta- and flaviviruses, chikungunya virus and sandfly fever virus.

Dr. Martin Strehle and Dr. Erik Lattwein have kept in touch after the workshop to observe the further development of the German-Georgian Program and the success of the workshop. As first studies are planned and EUROIMMUN has already received enquiries from Georgia about the acquisition of microscopes and test kits, this project seems to have a promising future.